All Collections
My Company
Aircraft
Calculate with Flight Planning

Written by Nicky Oblie
Updated over a week ago

With flight planning turned on, flight time calculations will consider ATC optimized routes on domestic and international flight legs and real-time or historical wind data. To have the module enabled in your account, email opsupport@avianis.com. Once the integration has been enabled, follow the steps below to complete the configuration.

Enable Module and Customize Cruise Profiles
Access the aircraft profile to turn on the "Calculate with Flight Planning" option.

When turned on, it will default using the standard type template profile and display like so:

Operations have the ability to customize default settings on each distance profile if needed. To do so, set use template to no. Click Edit by the distance profile to set a default cruise profile. Select from various settings: Custom Mach, Great Circle, Long Range Cruise, Various Mach Settings, Max Cruise, Standard or enter a Custom Mach value (if the aircraft type supports it). You can find more information on cruise profile settings here.

Set a default Cruise Profile in the aircraft profile in the flight time configuration table. The default will be selected accordingly based on the Distance for the leg. 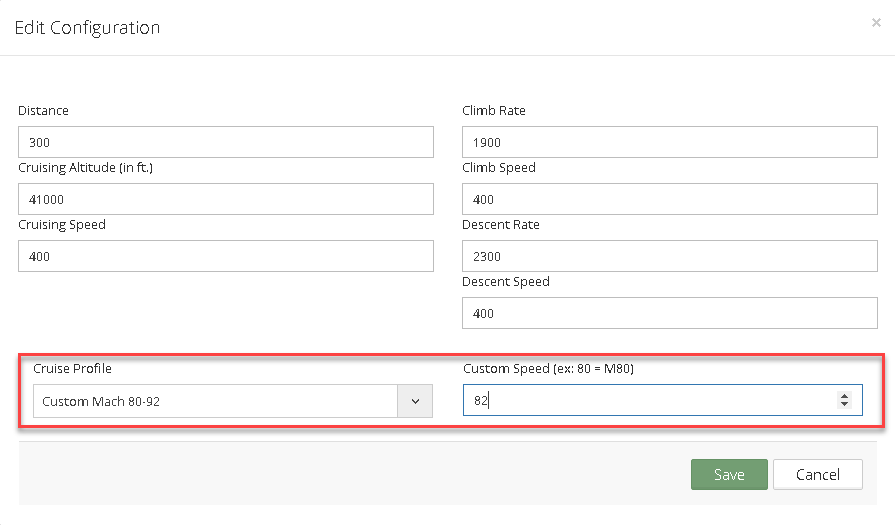 Customize Aircraft Payload
Access the aircraft profile > Flight Planning tab to define when calculating the flight time, should the application consider a min or max payload value.
Note: The payload option is considered when not tail specific. 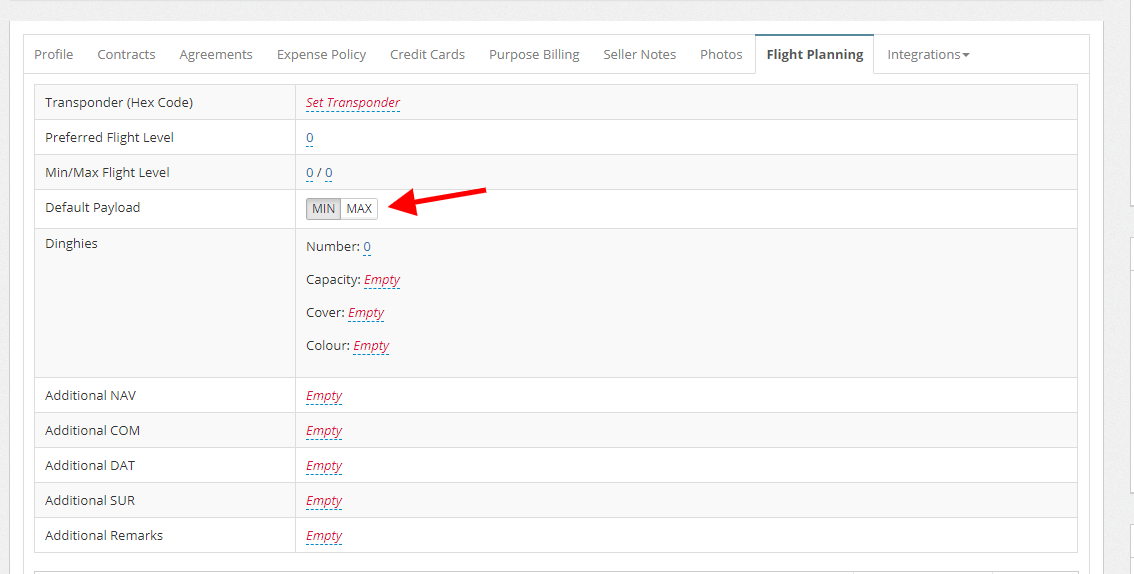 Once enhanced flight time calculation is enabled on the aircraft, access Operations > Settings > Configurations > ATC Flight Time Configurations. These settings allow the operation to set a default for when the calculations should run for the quote and the trip level independently.

Options when Creating the Quote/Trip:

Create Quote and Trip: When creating a Quote and Trip, if the settings do not match. For example, Quote is set to None and Trip is set to Both, then the quote calculates and displays in Avianis Great Circle while the Trip uses ATC. 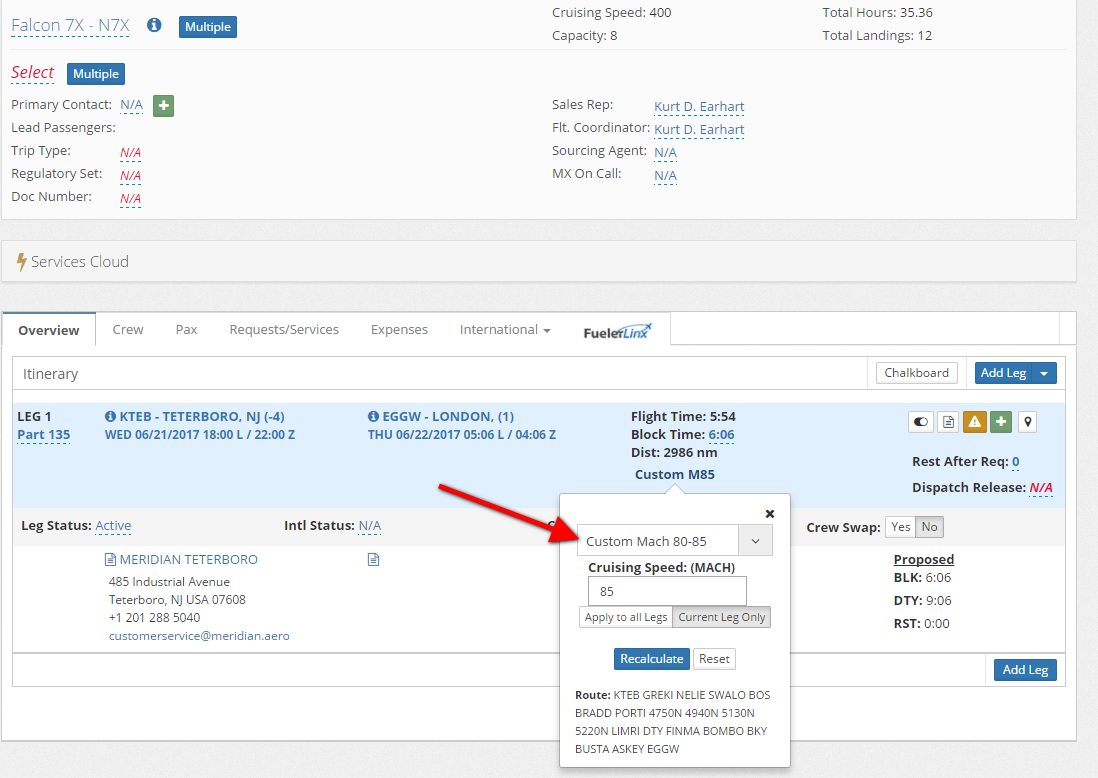 Note: The following airports have an added 'circuit time' when the itinerary is departing from and/or arriving into.

Airports to note are:

FAQ:
Q: Does the performance data for the aircraft consider step climbs when planning routes?
A: Yes, they do. This is worth knowing as it is a concern for aircrews when flight planning and step climbs are pretty common. The flight planning engine attempts to find the best fuel burn scenario. Some of this is dependent on takeoff weight and ISA temperature/wind conditions. However, aircraft engines tend to operate more efficiently at higher altitudes so as the aircraft burns off fuel and looses weight the crew will often choose to climb to a higher altitude to achieve a more efficient fuel burn.

Q: How is the route selected?
A: It is based on the MTT Route (Minimum Time Tracked). The MTT Route is the shortest route based on burn and time.

Q: Does it consider recent routes flown?
A: Not at this time. It considers frequently cleared ATC routing and published airspace data (airways, NAVIADS, SIDS, STARS).

Q: Why are the short position legs coming up with only 6 minutes?
A: At this time we do not take into account traffic volume and in a very limited way we take into account ATC routing. Our provider looks at frequently cleared routes from ATC however this data is limited for re-positioning flights between airports that are relatively close together. Most of the frequently cleared ATC routes would be between major city pairs such as LAX- SFO. Even though these are taken into account the system puts you on an optimized route that takes into account weather, aircraft performance, SIDs, STARs,NAVAIDs, and airways. All of this information is taken into account to calculate a route. For short routes though, say SJC - OAK, the system will often default to a direct route or send you out to one NAVAID and then back in. Although this is unlikely to be what the crew is cleared on the system defaults to that due to the difficulty of calculating a route between those two airports that takes into account all the factors previously stated. This is a limitation caused by the relatively short distance between these airports. In reality, the aircraft is unlikely to be put on an airway between those two airports by ATC anyways.

Q: How is fuel burn calculated?
A: This is a question asked quite a bit as flight crew of smaller aircraft generally have an idea from their FOM of how much their aircraft will burn first hour, second hour, third hour as fuel continues to burn off. FOMs is a bit more sophisticated than that, essentially taking several passes of potential routes and flight levels and then applying the aircraft performance data and running different variations based on the aircraft type. FOMS then applies the winds forecasted/historical wind model between each way point sector based on the grib wind data and temperature at the given altitude. The flight plan is calculated backwards from the destination to origin and if this scenario passes, its starts to narrow the plan by fuel/payload until it comes to a final optimum calculation. A single flight plan can run hundreds of possibilities before it comes up with a final plan that does not exceed any limitations. The algorithm is a bit faster if you are running a fixed payload and or fixed fuel as it does not have to run as many possibilities in those cases.

Q. Where is the wind data for real time and historic flight plans sourced from?
Real time high level grib wind models are loaded every 6 hours from the National Weather Service source (AVN) and UK Meteorology (Bracknell BKN) and are 30 hour forecasts which overlap. Historical models were designed from the high level grib data listed above over a period of 7 consecutive seasons ending in 2012.